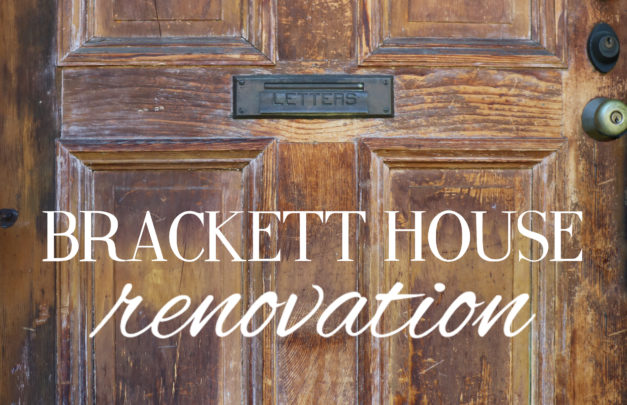 I have been dying to share some incredibly exciting news – and it’s finally time. I just flipped my first house! I call this project the Brackett House, and I documented the entire renovation from start to finish. Today’s post introduces the house, but there will be much more to come, so please check back soon!

Let me rewind for a moment. I started house hunting in the spring of 2016, and my parameters were fairly specific: an older home in need of restoration located in a desirable community. Inventory is really tight in the Boston area, and it’s not unusual for an open house to attract over a hundred people. So to my strategy: I targeted houses that were so run down realtors didn’t dare hold an open house, and I avoided properties with high tear-down potential, i.e. small houses on oversized lots. I didn’t want to get into a bidding war with a developer.

I actually had two accepted offers before I found the right house. The first was a dated but charming three-bedroom Stick Style house in Needham, MA, and I bid very close to the asking price.  Unfortunately, the home inspection turned up asbestos-laden vermiculite insulation* in the attic.

Asbestos is always bad news, but vermiculite is particularly problematic because it’s loose and granular. It is much more likely to go airborne than solid insulation. Moreover, this house had balloon framing, meaning that there was a void between the interior and exterior walls; it was highly likely that some of the vermiculite had slipped into that void and fallen down to the first and second floors.

Most vermiculite insulation in the U.S. came from a mine in Libby, Montana. Asbestos decimated the town– in the true sense of the word– as nearly 10% of Libby’s population died. Asbestos can be abated, but given the framing of this house, it would have been impossible to eradicate the vermiculite without opening every single wall. I just didn’t feel good about passing along a potential health risk to a future buyer, so I decided to pull out of the deal.

The second property was a darling four-bedroom English Tudor in Waltham, MA. The house had great character throughout, but the attic was the real showstopper: twenty-foot cathedral ceilings and tons of natural light. But of course that third floor also turned out to be the biggest obstacle. The home inspector noticed some problems with the floor joists and the roof rafters, so he suggested I bring in a structural engineer. The engineer confirmed the worst-case scenario. The floor joists on the third floor were not designed to support a proper floor– they were merely intended to hold up the second floor ceiling. I would have had to rip out the attic flooring, the joists, and the second floor ceiling and rebuild from scratch. On top of that, the roof rafters were too narrow for today’s code requirements, so I would have had to replace them too. That kind of reconstruction is astronomically expensive, so I had to rescind my offer.

But you know what they say… third time’s the charm. In early October, I spotted a 1929 English Cottage Revival for sale in Arlington, MA. Superficially, it looked pretty dilapidated– with cracked plaster walls, peeling paint, broken bathroom fixtures– but I could tell that the house had great bones. Most of the original architectural features were intact and unadulterated. The house gets lots of natural light, has a huge fenced-in backyard, and belongs to an excellent school district.

My offer was accepted, and this time the home inspection went swimmingly. Sure, the house needed tons of work, but there were no major surprises. The house was sturdy and well built, so I felt confident going forward. Flipping is always a gamble, but this house was worth the risk. 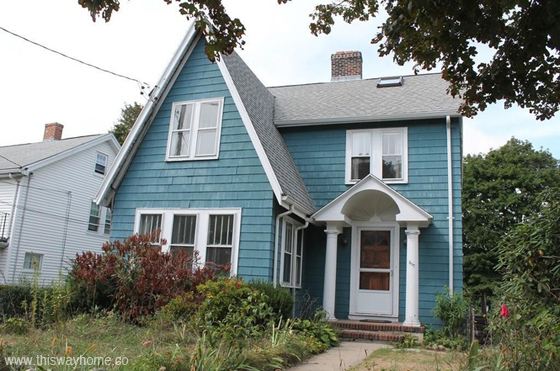 So enough preamble, let me show you the Brackett House! The shingle cladding and steeply pitched cross-gabled roof are hallmarks of the English Cottage Revival. The roof was in great shape, with fairly new architectural shingles that last 30 to 40 years. The front yard, on the other hand, was a mess. The ground sloped towards the house, causing water to seep into the basement, and roots from the overgrown bushes were starting to compromise the retaining wall between the yard and the driveway.

Up close, the house was showing signs of neglect. The front door was beaten up, and the steps were in desperate need of masonry repair. The actual portico around the door was in perfect condition, but it wouldn’t last if the concrete and brick underneath was left to crumble.

Before I show you the interior, let me give you a sense of the original layout. Just inside the front door is a foyer with a stairway to the second floor, along with a small-but-handy coat closet.

To the left, through a set of French doors, is the living room and a windowed bonus room. I took to calling it the sunroom because of all the wonderful natural light it receives.

At the back of the first floor are the dining room and kitchen, followed by a half bath and a small pantry with a door to the backyard. 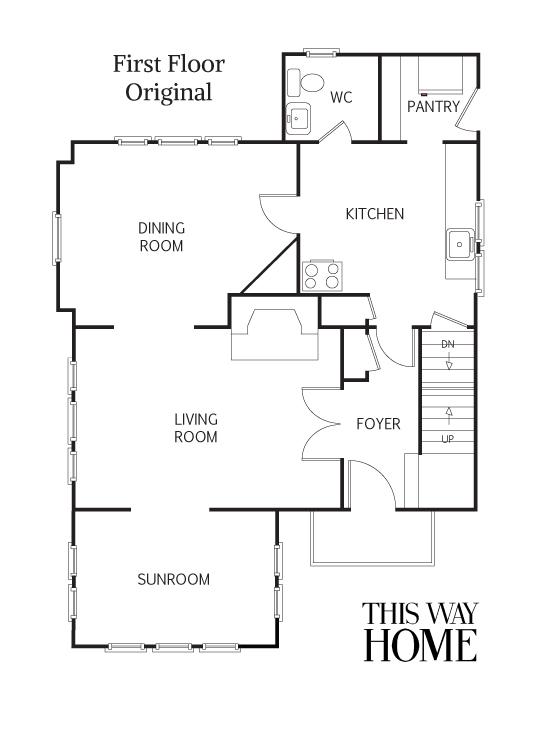 The foyer came with some charming details, including the gumwood stair railing and the little telephone nook above the stair landing. 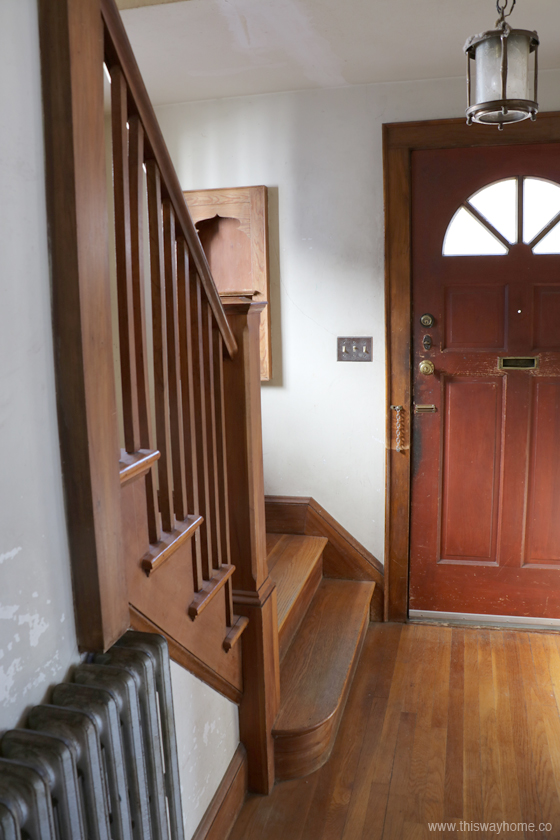 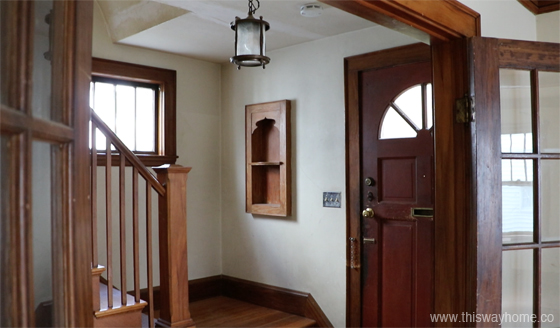 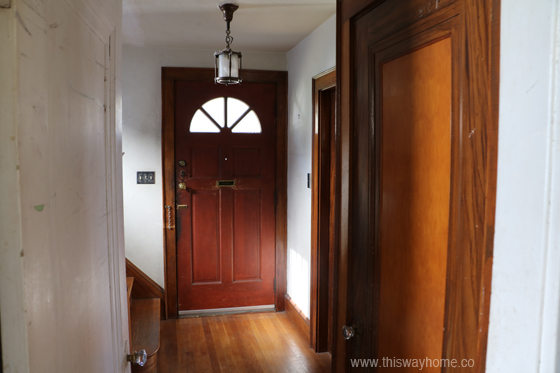 The gumwood beams in the living room were one of my absolute favorite features in the house. I also loved that the house still had all of its original three-over-one windows throughout the first and second floors. 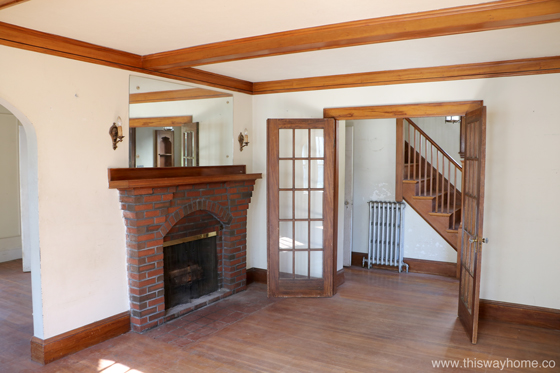 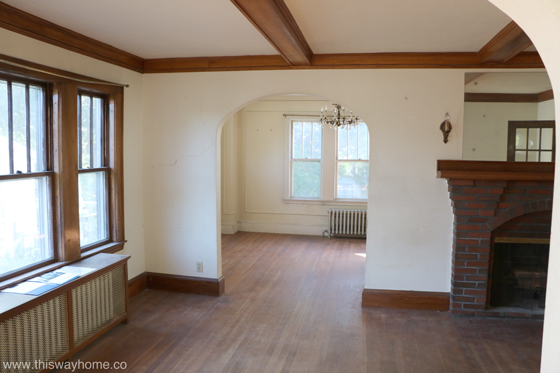 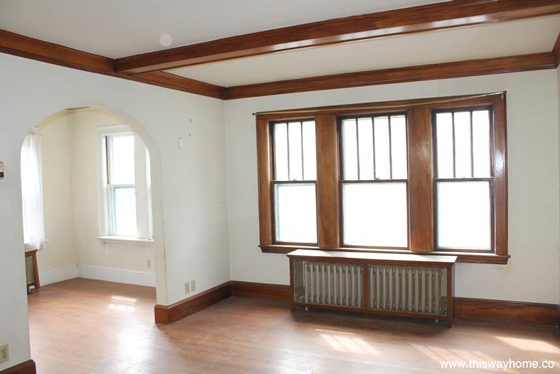 Here’s the small bonus room at the front of the house, just off the living room. Thanks to seven full-sized windows, this room gets incredible natural light all day– you can see why I call it the sunroom. 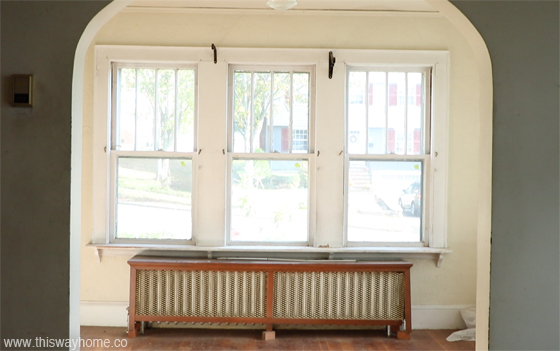 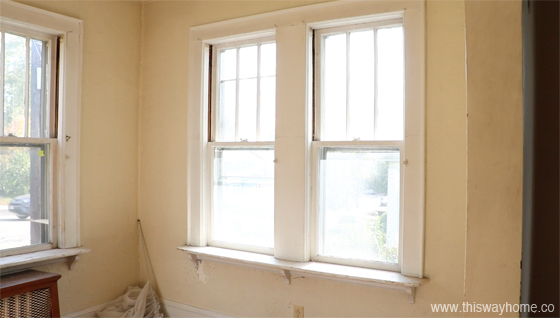 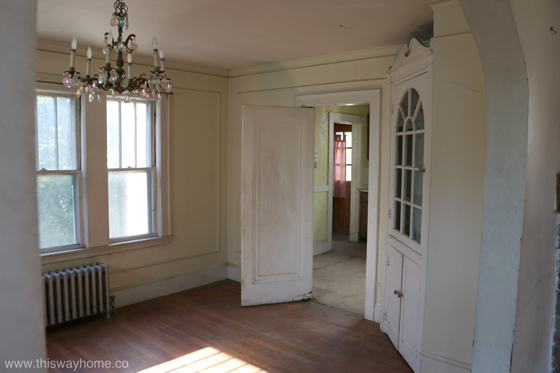 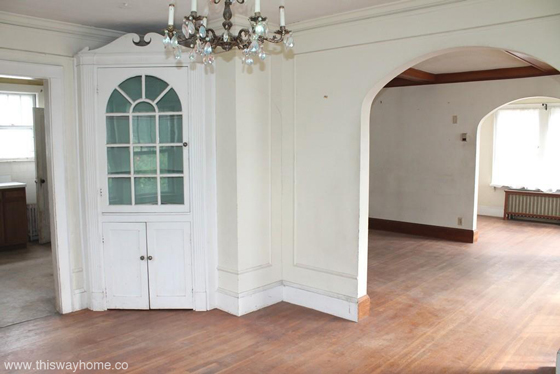 Now we get to the first Major Yikes of the project. Where do I start? Instinct told me the drop-tile ceiling had to be hiding something bad. And the badly stained linoleum floor? It might indicate that the original hardwood beneath had also been damaged beyond saving. Then there was the peeling paint, the old, filthy electric stove, and the fact that the room was too small to even hold a refrigerator (which had been relegating it to the pantry). And maybe the biggest design challenge was the fact that there were five doorways in this small room – to the pantry, basement, foyer, half bath, and dining room. That left way too little wall space for cabinets. 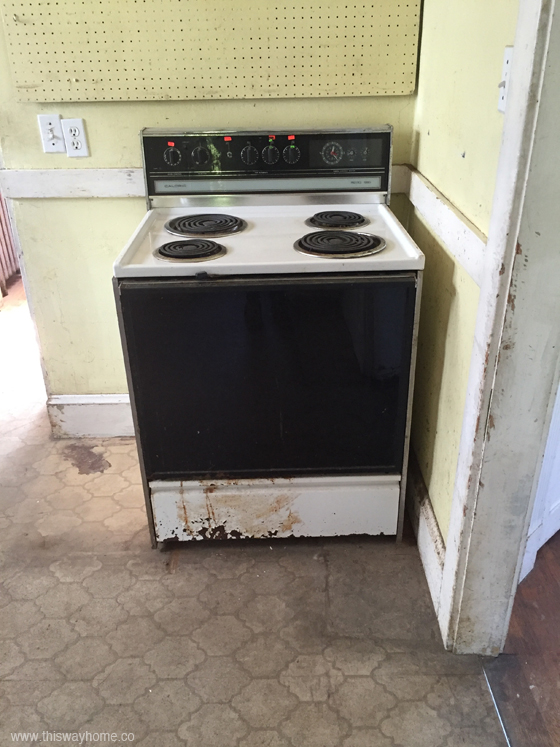 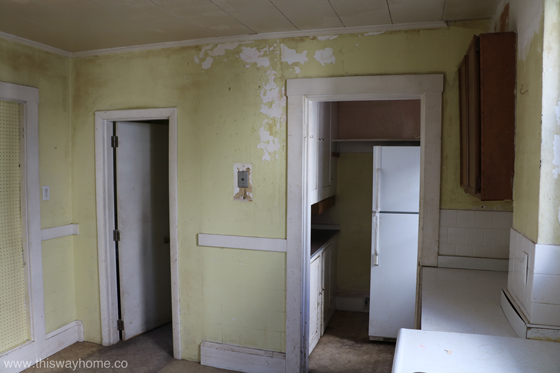 Here is the small pantry off the kitchen. Because of the kitchen’s awkward layout, the fridge ended up in here, blocking the side door to the house. 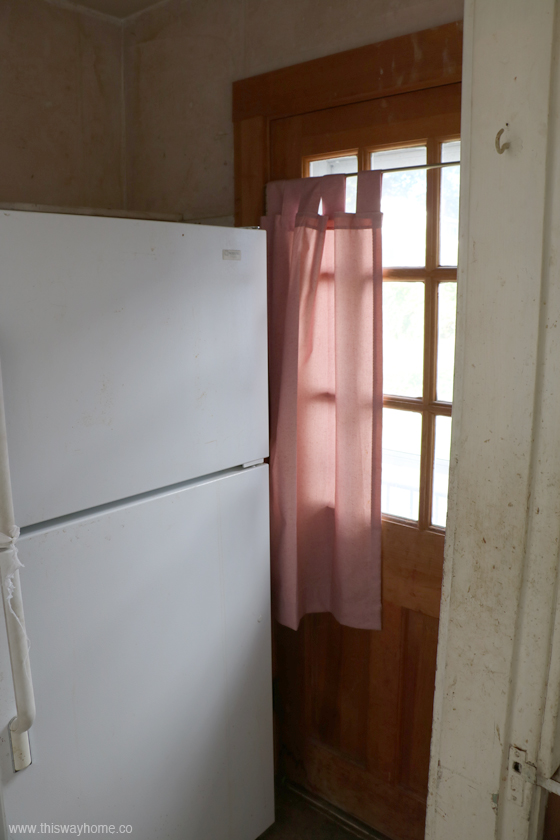 And lastly here’s the half bath. Even though this space was pretty gross– with broken fixtures and more discolored linoleum flooring– I was excited the house had an existing first floor bath. I’m a bit of a germaphobe, so I hated the fact this bathroom opened directly into the kitchen. But don’t you worry, I found a way around that problem– and I’ll tell you how in an upcoming post. 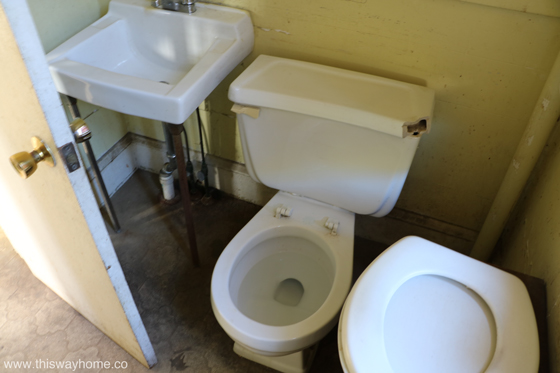 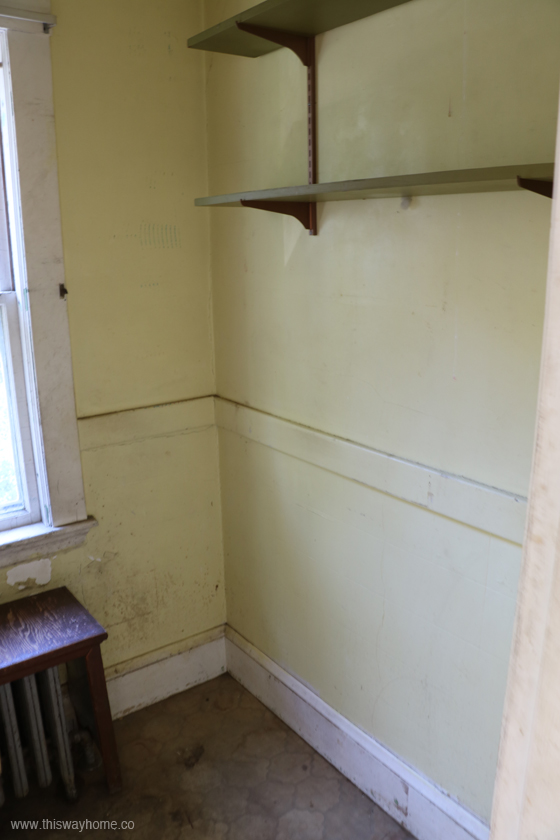 That’s all for today. In the next post, I’ll show you the rest of the Brackett House and the enormous bramble thicket of a back yard. Stay tuned!

*I should note that not all vermiculite insulation contains asbestos. Since the vast majority of vermiculite in America does contain asbestos, I operated on that assumption. I did not have the vermiculite analyzed because the tests are not very reliable.