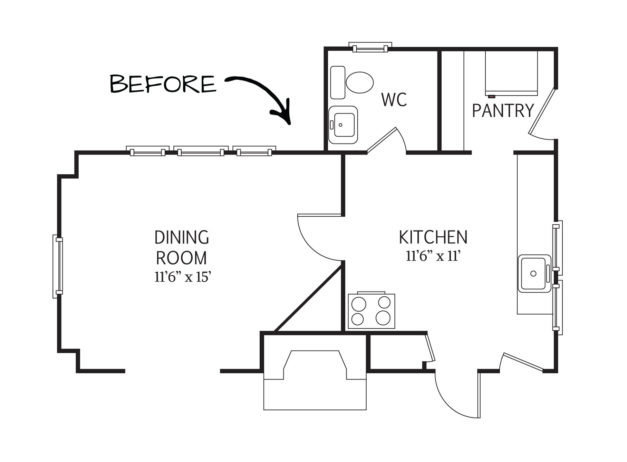 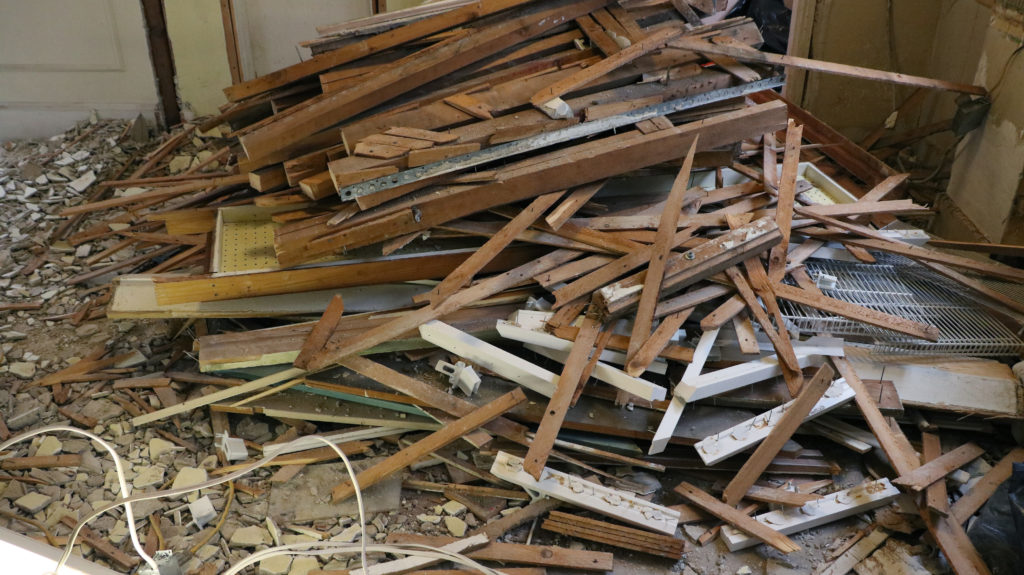 They say kitchens sell homes, so naturally the kitchen was one of my top priorities at Brackett House.

Between five doors and two windows, the original room had almost no available wall space for cabinets or appliances. The previous owner had relegated the fridge to the pantry because there was no good place for it in the kitchen. The half bath also opened directly into the kitchen, which I know is pretty common, but it grosses me out!

So here’s how I redesigned the space. Firstly, I knocked down the wall between the kitchen and the dining room. It may be an HGTV cliché, but buyers really do love an “open concept.” I didn’t want to remove too many walls in this home because I think the separation of spaces is integral to the nature of older homes, but I felt it was the right decision in this case. Opening the wall allowed me to expand the kitchen a bit beyond its original footprint and add some much needed storage and counter space.

I also relocated the bathroom door from the kitchen to the pantry. This small change made a huge difference. It freed up another wall for cabinets and eliminated the ick factor by creating a buffer between the bathroom and the kitchen.

The new kitchen is only a few feet larger than the old one, but I was able to triple the number of cabinets. I added a big peninsula, which provides seating for four and a large work surface for cooking. I placed floor-to-ceiling cabinets opposite the peninsula and nestled the fridge into a small recess beside the chimney, so the appliance does not take up valuable floor space.

The old pantry would now become a pantry/mudroom combo. I designed a wall of cabinets surrounding a recessed storage bench. It’s a practical transition space between the exterior door and the kitchen, and it provides tons of additional storage to the kitchen. 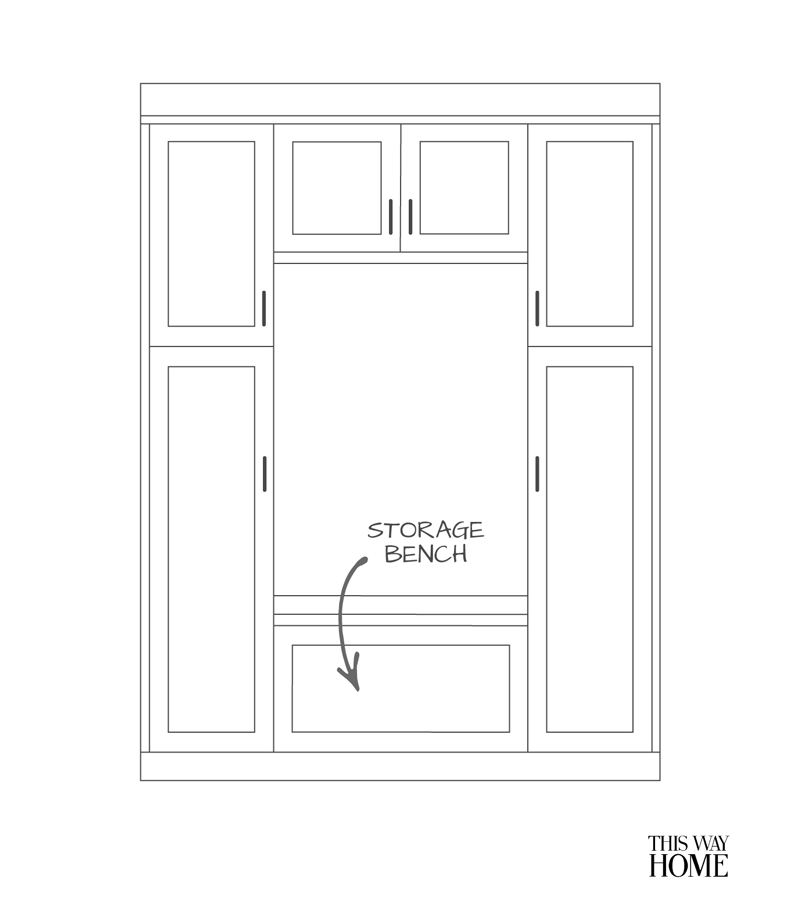 As soon as the demolition permits came through, my contractor got to work dismantling the old kitchen. I hired a super talented contractor named Mike Joliat of Joliat Contracting. Mike, aka Big Mike, works with his nephews, Little Mike and Billy; and they are so skillful, reliable, and easy to work with.

The demo job turned out to be pretty gnarly for the poor Joliat crew. The *very first* thing they did was to remove the kitchen’s lone upper cabinet, and they found an ancient mouse carcass plastered to the wall behind the cabinet. 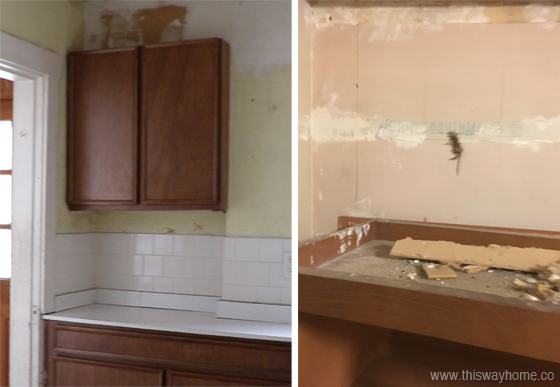 Oh but that’s just the beginning! The waste pipe for all the upstairs bathrooms ran straight through the kitchen– it was boxed in with some drywall and ran up though the bank of cabinets. There was a mysterious plywood patch in the drop ceiling near the waste pipe. I assumed a leak from the second floor bathroom had damaged the ceiling at some point.

But no. The leak was FROM THE WASTE PIPE! Turns out the old cast iron waste pipe had a golf ball-sized hole from which raw sewage had been leaking into the kitchen for god knows how many years. I still shudder to think about it! Thank goodness I was already planning to replace all the plumbing in the house– otherwise, my budget would have been blown on day one of demo. 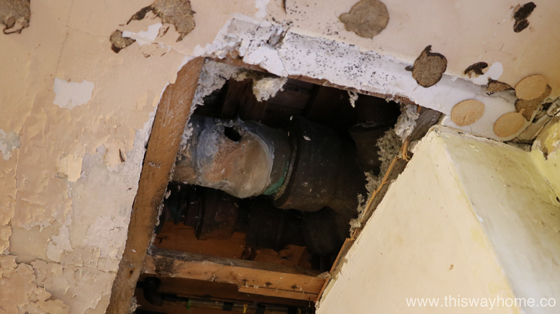 After those lovely surprises, the rest of the kitchen demo actually went smoothly. The guys tore down the drop-tile ceiling and the damaged plaster ceiling above it. They removed the old backsplash tile, which revealed some interesting remnants of the kitchen’s former decor. We even found a hidden note from the man who installed the kitchen sink in 1951! 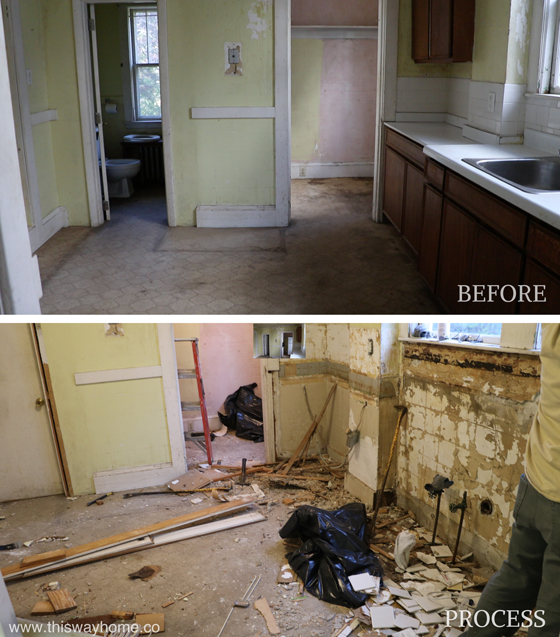 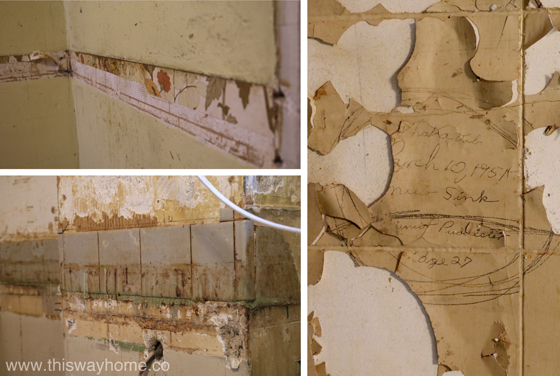 Mike and his team also removed the wall between the kitchen and the dining room, and immediately the room felt so much bigger and brighter. 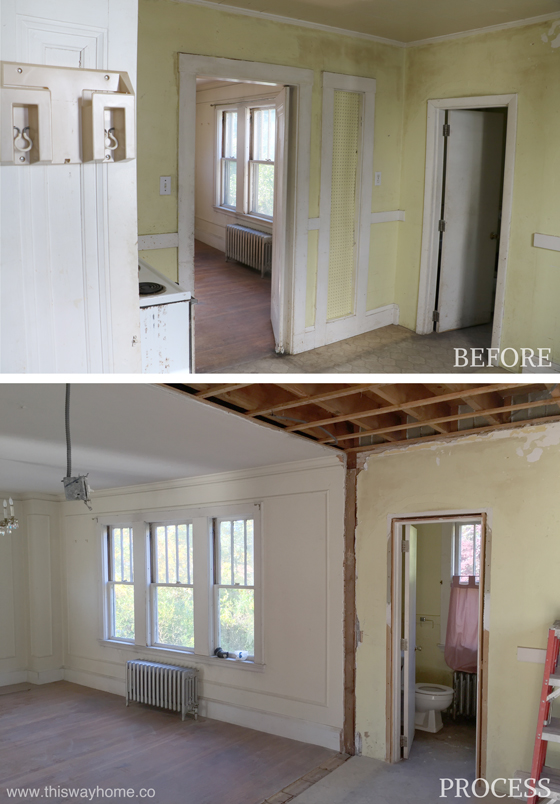 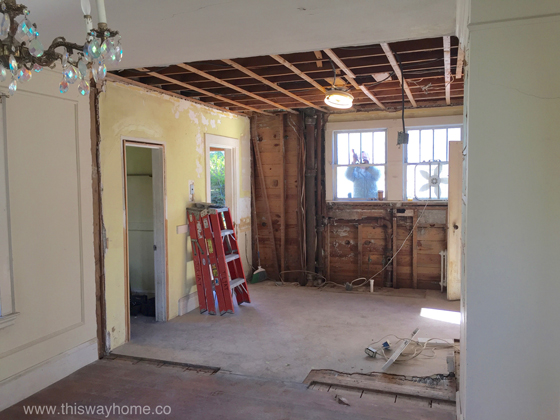 With demo well under way in the kitchen, the guys were ready to move upstairs. Next time, I’ll show you how I redesigned the second floor by expanding the full bath and adding a brand new laundry closet.