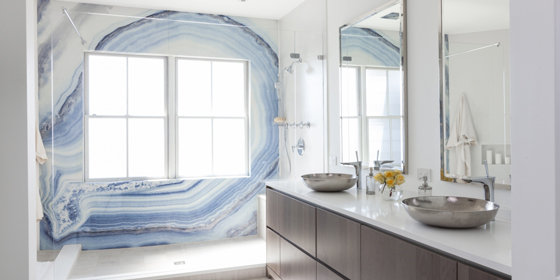 A large agate mural is the focal point of this breathtaking bathroom from JSE Interior Design.

The design world’s flirtation with geological decor has grown into a full-blown love affair. Rock forms, minerals, geodes, and– most commonly– agate have truly stolen our hearts. Why are we so drawn to these elements? Take agate as an example.

Agate is simultaneously chaotic and systematic; it forms highly irregular organic shapes, within which are aligned perfect parallel bands of color. This balance of tumult and order is so pleasing to the eye, I can’t imagine the design community will abandon the trend any time soon.

JSE Interior Design, helmed by owner Jared Sherman Epps, created the breathtaking bathroom shown above. They used a custom waterproof panel from Alex Turco on the back wall of the shower in lieu of standard tiles. The freeform organic shape and vivid blue of the agate mural perfectly complement the room’s sleek minimalism. The oversized scale of the mural demands your attention, while beautifully framing the room’s two windows. 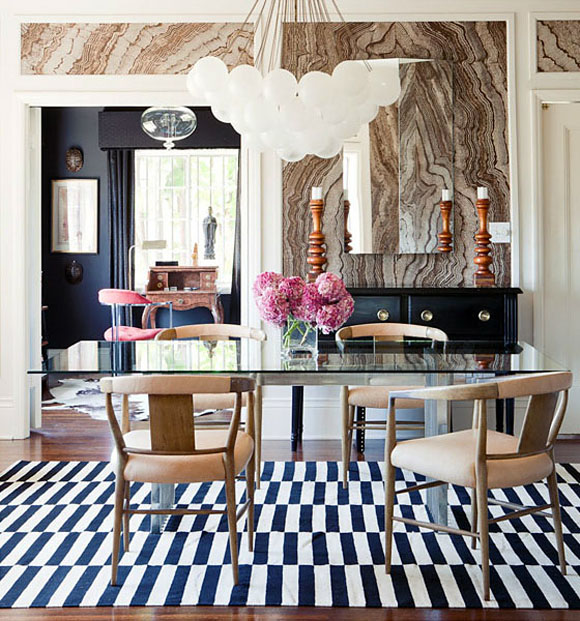 The Strata Study fabric and wallpaper from Apparatus Studio and Zak + Fox was inspired by stratification, the layering of sedimentary rock and soil which naturally occurs over time. Gabriel Hendifar, co-founder of Apparatus, hand-painted the design for Strata Study. Perhaps because it draws upon the immemorial process of geological formation, this design feels timeless. It pairs with traditional and contemporary pieces alike, as evidenced by the gorgeous dining room above. 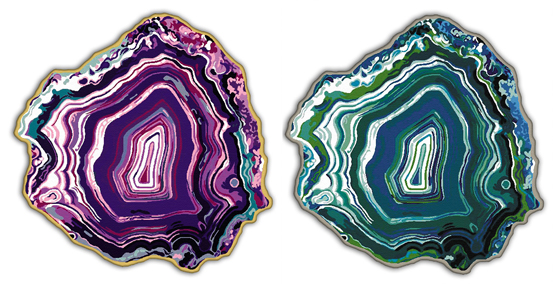 Agate-inspired rugs from Studio Bijoux. Pictured in the Amethyst and Azure colorways.

Studio Bijoux designs these eye-catching Étage rugs, which mimic slices of Brazilian agate.The Étage’s irregular shape sets it apart, but it is close enough to a circle that it is easy to incorporate into a room. The rugs come in a variety of sizes, so you could use them for a multitude of purposes– from grounding a seating area or at the center of an entrance foyer.

A pillow in Marbleized Quartz fabric from Tonic Living.

Tonic Living‘s Marbleized Quartz fabric also capitalizes on the geological trend. It plays with the undulating curves in marble and quartz stones. The pattern reminds me of the beautiful marbled pages that grace the endpapers of antique books. Tonic Living’s Marbleized Quartz fabric has hints of metallic to add to the glam factor. I love this fabric in pillow form (above), but it would also make for gorgeous curtains or upholstery. 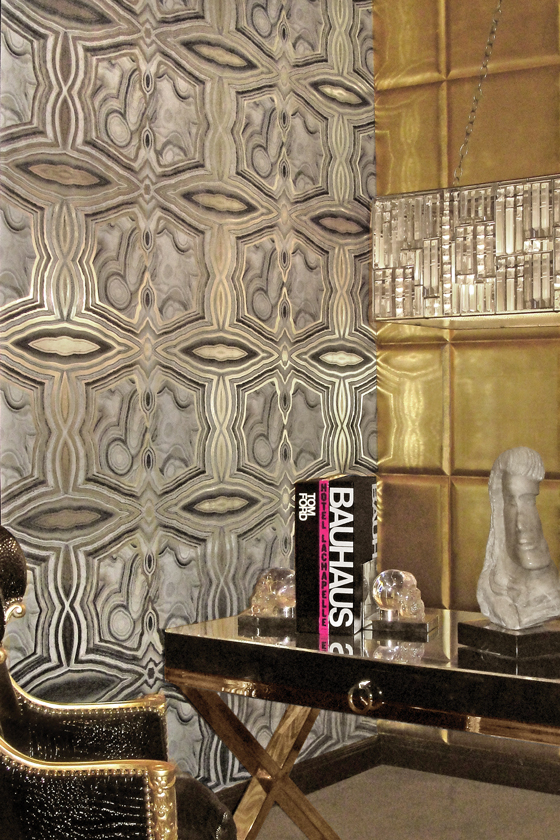 Rock On wallpaper from Circa Wallcovering in Natural colorway.

Rock On, the wallpaper featured above, is the product of a collaboration between jewelry designer Kimberly McDonald and Circa Wallcovering’s Jamie Adler. The design was inspired by agate lace, but the pattern has been mirrored over and over again to create a kaleidoscopic effect. The paper is printed on silver mylar to add a bit of sparkle and shine.